This week has been a difficult one for me. The most stressful time came at the end of the week, when one of our pet rabbits (Honey) stopped eating and started to drool. A few trips to the vets and one operation later (today) and she is back home after having had some spikes removed from her teeth that were causing her pain. She is still quiet at the moment, but now I know the cause of her not eating has been treated, I am more hopeful to see her start to improve again soon.

I did manage to do a little more writing at the start of the week, and can say that the quests are still making progress. I also spent some time designing one of the areas that may be reached, although there is still more work to go there. Unfortunately, for the reasons given, the amount was not really enough to move on the progress marker, although I have jotted down more ideas to translate into module writing.

The poll I carried out regarding awards came to an end last week, and I was once again pleased to get a healthy 41 votes. The two clear winners of the Rewards Poll showed that players are most motivated by either finding new Weapons & Armour or Advancing The Story. I found myself agreeing with all of the comments and while some of the other rewards scored lower, I do hope to give a good smattering of the various types listed in the module. Furthermore, I hope to also elevate the "value" of finding gold. At the moment, it is obvious that as a reward it does not inspire much in players, but if they found that they could make good use (or even essential use) of that gold, then maybe it will become more desirable.
Posted by Lance Botelle (Bard of Althéa) 4 comments:

Email ThisBlogThis!Share to TwitterShare to FacebookShare to Pinterest
Labels: Better The Demon, Personal

As the title suggests, I am moving more into the realms of writing quests than covering mechanics ... at last! I know I have reported on this before, but this is also the first time I have started to write conversations and design areas and not had to stop to sort out a game mechanics issue. I even have managed to pencil in a few more areas in my notebook, which are now ready to build in the tool set.

Having started this process, however, I am reminded of the extremely hard task of writing conversations (and journal entries), allowing for varied player options and depth. And it's not necessarily the number of options as such, but more to do with how the different options have an impact on how the various quests will run and interact with each other - and keeping track of all the variables. You know what I mean: Give the player more options and you have geometrically increased your variable count. E.g. In one quest I am currently writing, the player can react to a cut scene in one of two ways. On the surface on things, this would appear a simple two-way check, but as I have come to code for it, I have been reminded of a whole number of other aspects that must be covered if the "obvious path" is not chosen. How tempting it is to not give a choice to the player at the cut scene stage and just move them into the quest regardless. Hopefully, the extra effort of allowing a choice even at the these early stages will give the module a feeling of greater freedom and less manipulation.

I have to agree with Frank Perez (Faithless Blog) at the look of the up and coming module called Star*Drive by Yaddaman. The work looks like an absolute masterpiece and done with complete dedication to the task. How one man can have done all that I have seen from the screenshots is simply amazing. I do enjoy sci-fi games as much as fantasy ones, so to have something like this mod available in NWN2 is probably one of the most exciting modules to come along since its release, as it will open up a whole new avenue of interest to me. I remember trying to mod a System Shock 2 module once, using ShockED. Now, if this mod is as good as it looks, I will have the pleasure of being able to rekindle my sci-fi modding as a second hobby outlet. (NB: It won't ever interfere with my NWN2 projects, but will give me something to look forward to in the future.)

Only three days left to vote in the poll! If there is a reward system you want me to consider in the module, be sure to vote and add a comment.
Posted by Lance Botelle (Bard of Althéa) No comments:

Email ThisBlogThis!Share to TwitterShare to FacebookShare to Pinterest
Labels: Announcements, Better The Demon

I just spent the last couple of days trying to track down why a variable was being reset to zero whenever a second player joined the module when played in MP mode. It turned out to be a function I wrote that was buried inside an include file that helped keep track of module variables between modules in the same campaign. Thankfully, I tracked it down and fixed an issue with this and with the new PC/Companion AI that allows different players in the same MP game to control their own PCs separately from the leader. i.e. Players can control their own PCs independently of the leader with respect to stand ground and follow them. It may not be a major alteration, but it does make it feel like the players are more in control of their own group of PCs even though being part of the same party! 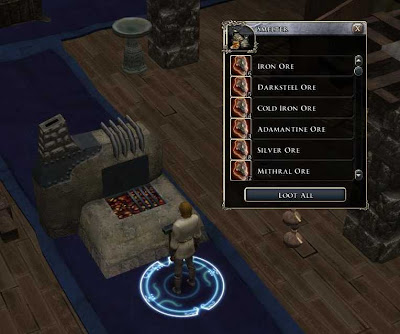 On a more positive note, I did manage to finish coding the "smelter" that allows a player (with a high enough skill) to smelt ore (five of a kind) into an ingot of the same material. And to make things easier for the player, they can add all the ore they have found in a single go and when used (closed) the smelter differentiates the different types automatically and even provides the remainder of ore. (It takes five ore to make one ingot.)

This is just another part of the crafting system where a player controls their components and is encouraged to make their own items. Don't forget that the economy of the system has been greatly revised, which means crafting/enchanting is a lot easier to pay for than it is at the moment. Of course, gold is harder to come by, and so will make gold a more attractive find as well. As a guide though, no single item can be sold for more than 10000 gp. If the value of the item is more than that, then it is considered a "unique" item crafted for the specific use of the player and no-one will (can afford) to buy it. (Don't worry, the smelter wll not appear on a carpet as it does in the screenshot!)
Posted by Lance Botelle (Bard of Althéa) 2 comments:

A while ago I explained how I was going to change the way some spells worked because I felt they were too restrictive as they currently played. To this end, I have already altered some and intend to work my way through the rest as time goes by. Here is my list of alterations to date, but please tell me if there are any “pet peeves” about certain spells that you would like altered. If I think it will improve the spell, then I may just add it to my alterations as I go along. As a guiding factor, I often preferred the 3e PnP description to any set in the OC. Alternatively, if you think any changes I have made are too biased, then let me know and I may reconsider.

By The Full of the Moon For those interested in photography, I took these photos of the moon the other night and thought I would share them with you. Quite atmospheric I thought.
Posted by Lance Botelle (Bard of Althéa) 6 comments: