What's In A Name?

I have been giving the name of the modules for the campaign some thought in the last two weeks and, to date, I am preferring "The Scroll!". But, why am I mentioning this now? Well, the "Better The Demon" name has always been (and will remain) the module's working title. However, as I am beginning to bring the story arc together and think about the different backgrounds from which the player can start, I wanted to have a story name that fulfilled the overall reason for the module's existence. As time has gone by and I have given this campaign more thought, I have swayed one way and another, and even now I am not 100% certain. But, what this also means is that the module is coming closer to completion because of the naming. It's strange how someone can work on a project for a number of years, know the story, and yet not know why it exists! OK, let me stop there before I get too philosophical. The bottom line is, I believe my reaching the end of this module is becoming more of a reality every day. That's why I felt it important to let you know that the module has finally yielded its name to me ... or is very close at any rate. For if I do not receive any more inspiration regarding the title, it will remain "The Scroll!" (Part 1 for the first module).

The results of the last poll for lighting preferences are shown in the image below. There was a clear 3 to 1 preference for the lighting to remain true to the environment rather than fiddle with the lighting to allow the player to see regardless. The two "other" comments touched on something which I also agree with though, which is to sometimes adjust lighting from what would be a completely dark environment (in reality) to one filled with some unusual light settings for a fantasy environment.

So, the bottom line here is that a player will have to ensure their PCs have some means of lighting some environments where it is otherwise completely dark. Of course, PCs with Darkvision will be OK, but other PCs may require torches, lanterns, light spells, or magik items with light to be able to make any progress in a dark area.

This post is more straightforward than usual because I have not been doing much more than filling in blanks and empty templates of sections that needed doing. That has included writing some conversations, doing a little scripting, and thinking about the module in general. I have also sent some area information to Eguintir Eligard, who has generously offered to help design it for me, and save me from a task I am not very good at at the best of times.

I will keep plugging away at this all the while my health permits, and will, of course, keep you updated here in future posts.
Posted by Lance Botelle (Bard of Althéa) 5 comments:

Email ThisBlogThis!Share to TwitterShare to FacebookShare to Pinterest
Labels: Announcements, Better The Demon, The Scroll

Regular readers will have noticed that the module has not progressed beyond 85% for quite some time now, and I feel I owe an explanation for this. I may have already explained it once, but would like to explain the apparent "inactivity" it would suggest.

First and foremost, I do have to explain that my illness does prevent me from working on this project as quickly as I would like. Although, I don't want this to come across as an "excuse" for being so slow, but it obviously does affect the rate quite dramatically. That said, because my illness impacts everything I do, I rarely find myself in a position where I can do much else anyway, and so I end up doing what I can on the module just to keep myself from going insane. 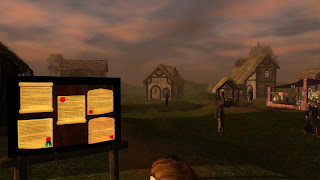 Anything on the notice board regarding when this module will be completed?
Now, one of the main reasons this figure has not moved much in the past few months, is because I recognised that after breaking the campaign into three parts, and determining to release the first part as soon as it was finished, that the first part (by itself) would be rather lacking in design/depth - and so would need extra material. That is, much of my earlier work (as I worked on all three parts at the same time), had to be sidelined to a later date and until after I have released the first part.

It was at this time, that I decided to add a new exterior area (whose screen shots I added a few months ago) and to work on the adventures around this new section of part one. And rather than recalculate the amount of work I had already done towards part one (and which would have appeared to result in a backward negative movement in its development), I decided to leave its percentage score alone until I had caught up with its calculation.

Since that time, I have been working on both the new area and its associated interior areas and the adventures that go with it. At the same time, I have been tying in the existing material that I have been working with previously for part one. I am excited by the results, as the module does now feel much more rounded and will make for a great first part. Yet, the addition has meant the module's overall development score has been left untouched as I work out just how much the overall position for part one is.

In a very rough calculation, I would say that part one is probably around 65% complete, but this would not necessarily be an accurate figure representing time remaining because the parts that remain to do are much simpler than previous parts. However, I am reluctant to suggest how long these remaining parts will take me, as they are the "fluid" sections of the design that will increase or decrease in length according to how the story develops in my own mind. i.e. If the related story/quests are straight forward (which is my aim), then a figure of around 85% is about right. However, I have found that some of the latest developments have taken longer than I first thought they would, and so I have not yet been able to increase this development figure either.

1) One interior area still needs its design finished.
2) A handful of interior areas still need some contents/placeables adding.
3) Four quests need finishing (as far as journal entries appear to go).
4) A few creature stats and placements remain for a few areas.
5) Only 2-3 main conversations remain to be written.
6) Some spell scripts need editing to be compatible with a couple of my systems.

I am currently working on parts 3, 4, and 5, as I find these parts the easiest to manage . Parts one and two I will only be able to tackle when I am feeling at my best, which I am unable to predict. Part 6 is something I can work on at a later time as and when required.

I do thank you all for being patient with me, and the encouragement I still receive from you helping me to persevere with it. And I certainly do appreciate the help and offers I receive about helping me out with the latter parts (modules 2 and 3), which I would welcome if people are still up for it.
Posted by Lance Botelle (Bard of Althéa) 7 comments: