This is going to be a very brief post this week for two reasons: 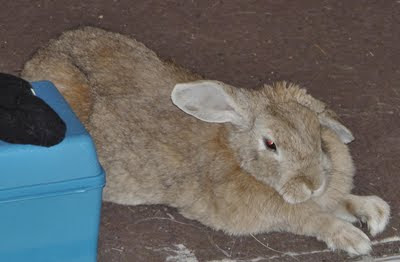 1) Our upstairs rabbit, Honey, has not been very well again. Poor thing suffers a lot with teeth problems and now she appears to have nasal issues on top - caused either by another hidden tooth problem or some sort of sinus issue. I have had to spend some time looking after her (collecting dandelion leaves every so often - the only thing she feels comfortable eating at the moment) and sitting alongside her, trying to make sure she stays warm and content. She had a stressful last week being taken to the vets. It stressed me too (for her sake). She is still not 100%, but I am hoping she is making a gradual recovery. Time will tell.

2) I am writing conversations for the characters and the whole process is going a lot slower than I had hoped it would do; probably partly due to the above, but also due to the fact that the current conversations are quite involved with journal entries and variable settings. This is probably straight forward for most people, but I have to pace myself when dealing with this sort of thing and so only manage a very little towards it in a day. Hopefully, the end result will support multiple paths and approaches to the conversations and quests in question. Yet, once these ones are done (required as I started to design the module this way), I intend to curb my ambitions in future and greatly simplify them if possible. (See next.)

There are still quite a few conversations to write, which will gradually get easier as I move away from earlier designed ideas and move toward a more "linear" style of writing. Do I here a "gasp" from you when I mention "linear"? Well, let me just clarify what I mean by "linear": The gameplay should remain "non-linear" (as good as any "non-linear" game can be), but quests will not be so intermixed as I have them at the moment. The problem at the moment, is that many of the quests revolve around a few specific NPCs (as normal), but that every NPC also potentially has an input to another NPCs quest (not normal gameplay design). Add to this items that can be found that open more conversation nodes and .... you get the picture? (It's difficult to describe exactly what I mean without giving too much away.) Future quests and conversations will be reserved to a "one on one" design. That is what I mean I will be changing to be more "linear".

Once I have these conversations out of the way, I can look at finishing the last few areas that I decided to add for greater gameplay of module 1, and then begin tying the whole thing together and look at producing a beta for testing. It's probably still a few months away yet, and really depends on how well I can deal with the conversations and design those areas. One thing I can say, however, is that I am beginning to see a light at the end of the tunnel (for module 1 at least) .... Hoorah!
Posted by Lance Botelle (Bard of Althéa) 4 comments:

It's been over a fortnight since I last blogged, but in that time I have been trying to carry on gradually chipping away at the project. There have been some distractions, including birthday's, minor operations and small hardware glitches, but between all that I have managed to do a little in the toolset.

On the scripting front, I have been trying to achieve a "simple" animation: make an NPC sleep and wake up when disturbed in some way. Since using NWN2 (as opposed to NWN1), I have found scripting animations more difficult. In particular, the latest animation I was attempting to create would not stop its loop after being disturbed, so an NPC would "wake up and get up", only to fall back to the floor asleep again. Thankfully, Pain (who I have mentioned in blogs before) was able to give me the answer of passing the "%" sign as an animation, which stops any current animation that may be playing. A useful tip I now share with you.

Another incident that caused me to slow down on the creative front was the need to update my VGA drivers. After doing so, I noticed that an in-game texture (on one square only) was not looking like it did in the toolset. After some experimentation, I was able to track the problem down to disabling the "Wait For Vertical Sync" option in the graphic settings. Removing the cross from the box (which means it does not wait) allowed the texture to display as it should in the game as well as the toolset. UPDATE: DISABLE Normal Mapped Terrain will resolve this issue with more consistency. The previous method often required the game to still be restarted,whereas the latter method does not. The only problem is that the textures do not look as good using the latter method.

The material I have managed to add in the last couple of weeks includes a new image relating to a puzzle in the game. I won't go into much detail so as not to spoil it, but it involved creating a new image that once found in the game is a clue to solving one of the main puzzles of the module. There are a few more parts to this puzzle that I still need to do, but I do have the entire puzzle outlined in my paper manual already. I am quite excited about its inclusion and look forward to seeing players reactions and responses when played.

On another front, I am continuing to write conversations for NPCs and am now finding myself having to be extra careful in doing so, as my "open ended" design has me having to consider a number of approaches the player may be coming from. As I mention in a previous post somewhere, I intend to reduce these types of scenarios to help reduce the amount of extra writing these type of open-ended approaches require.